STRICTLY Come Dancing fans have slammed the BBC after it dropped a major spoiler about Tyler West.

The DJ proved he’s the fittest man on the dance floor after completing the London Marathon just hours after a high energy performance on Saturday night.

During the London Marathon coverage on Sunday, presenter Gabby Logan chatted to the radio star and quizzed him about his upcoming dance next weekend.

Dressed in head to toe running gear, Tyler replied: “Thank you Shirley Ballas, I don’t think I’ve hardly slept on that comment to be fair.” 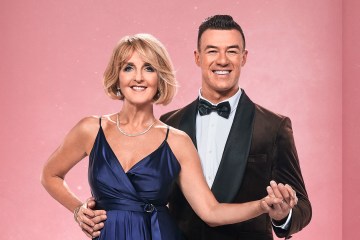 Gabby then tried to sneak in a question about their next performance – but Tyler’s pro dancer partner Diane Buswell quickly shut down the question to avoid any result spoilers ahead of Sunday evening’s show.

The TV host said: “As a massive Strictly fan, what’s the next dance?

“Can we get a little sneak preview.”

Hesitating at the question, Diane said: “We need to see if we get through first.”

Tyler added: “I’m loving every second of it.”

Realising her blunder, Gabby responded: “Oh course! We’ll find out tonight…I wonder if you do.”

One wrote: “Love the fact Gaby putting her and Tyler in an awkward position. #Strictly”

A third said: “It’s a good job Tyler West wasn’t up for the dance off. He’d be exhausted after his marathon run this morning #Strictly”

“Interesting that no-one is mentioning Tyler’s London marathon experience in the Sunday show. This is why it’s SO RIDICULOUS that it’s recorded and shown the next day!! #stricty,” someone else joked.

Another chimed in: “Why don’t they show them Saturday night when they do them. Tyler at marathon today so wouldn’t have been at a Sunday results show.”

Tyler was among other celebs pounding the pavements, including Mark Wright, James Cracknell and McFly’s Harry Judd.

The Kiss DJ looked relaxed and happy on the 26mile tour of the capital, which he tackled to raise money for UK Youth – a charity whose mission is to empower young people of all ages and backgrounds.

It comes after Strictly fans were left shocked after the first eliminated dancer of the series leaked online last night.

Every year, the identity of the celebrity who gets the boot is revealed on social media hours in advance as the Sunday night results show is pre-recorded on Saturday evening.

But viewers of the hit BBC show were left fuming as the spoiler revealed the unlucky dancer who was first to get the boot.

After the first public vote of the 20th series the Loose Women’s Kaye Adams, 59, found herself up against singer Matt Goss in the dance-off, before the judges chose to send her home.

Strictly fans were left upset that the results were online hours before Sunday’s episode.

One wrote: “I am beginning to lose interest in the show if the results are going to be leaked each week. #Strictly”

A second wrote: “I don’t think the right people were in the dance off or eliminated but there’s not much in it, later eliminations will be more controversial.”

Original Mean Girls cast: Where are they now?